Article 370 Was Bridge Between Delhi and J&K': Away from Home, Kashmiri Students Rue Lack of Consultation

Article 370 Was Bridge Between Delhi and J&K': Away from Home, Kashmiri Students Rue Lack of Consultation 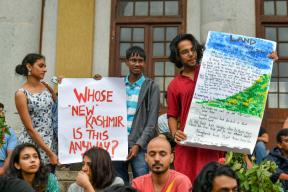 New Delhi: The rising anxiety and uncertainty in Jammu and Kashmir, fuelled by heavy troop deployment, reached new heights on Monday when Home Minister Amit Shah announced the decision to repeal Article 370 of the Constitution which grants special status to the state.

However, for Ishaan Michu, a Kashmiri pandit student from Srinagar who studies at the Delhi Law Faculty, the announcement came as a “new dawn in Kashmir”

“This step has been a long time coming. Article 370 and Article 35A have always been temporary arrangements. Article 35A was brought by a Presidential proclamation, which could be revoked by a Presidential proclamation. The Supreme Court had even passed a judgment which said that the law had acquired a permanent status. Thankfully, on Monday law has taken its course and we have seen a dawn in Kashmir,” he said.

According to Michu, the revoking of Article 370 will help the J&K economy. “The stagnation that the state economy has suffered for decades will be reversed. It is a boon for students across India who wish to seek employment there.”

“It was stupid on part of previous governments to have not taken this step," he added.

With Article 370 revoked, the northern state will also witness Article 35A gone. The latter granted special rights and privileges to the people of Jammu and Kashmir. It protected the demographic character of the state by denying property rights to people from outside Jammu and Kashmir. It also did not allow them to get a government job.

Saurabh Singh, a student of Hindu College, is happy with the Centre’s decision on Kashmir. He said now that the state is open for work, he would be very willing to look for work in Kashmir. I don’t wish my government to hold me from working and living somewhere. The state does face problems in infrastructure, employment and education, but those will be dealt positively in the times to come. This is the beginning,” he said.

The Monday announcement was followed by a heavy backlash from the opposition parties. PDP chief and former Jammu and Kashmir chief minister, Mehbooba Mufti, who is under house arrest since Sunday, slammed the Centre for their “clear and sinister” intentions.

Since the government has also decided to bifurcate the state into two Union Territories – Jammu and Kashmir, which will have a legislature and Ladakh, which will operate without one, political parties from the state launched scathing attack on the BJP government at the Centre.

A similar sentiment is resonating among Kashmiri students residing in Delhi. “The way Article 370 was revoked is unprecedented. It is a psychological warfare. The way we Kashmiris are suffering, the organisation of troops and the sense of threat that was invoked in the state is not the way to bring positive change in a democracy,” said a student of Jamia Millia Islamia on the condition of anonymity.

Another student, Irfan, who moved out of Srinagar five years ago, hopes the decision to revoke Article 370 does not cause further violence.

"The sudden announcement of revoking Article 370 is an issue completely different from the debate whether Article 370 should be there or not. After quite a struggle had peace prevailed in the Valley after the Burhan Wani episode. The kind of peace that was normalised has been disrupted,” he said.

Irfan completed his undergraduate education from Delhi University and then moved to Jawaharlal Nehru University to pursue a Masters in International Relations.

According to him, the Centre did not take a soft approach to the announcement. “This is not the time to mess around with Constitution. As it is in Kashmir, people do not trust the Central government. After today's announcement, I fear the degree of mistrust has increased. It seems as if the Centre is playing games with us,” he added.

However, as a Kashmiri committed to bringing peace to his Valley, Irfan is not opposed to the idea of diluting the control of Article 370 in Kashmir.

“It would have been better it the Centre had made amendments to the Article and loosened its grip on the state eventually. But it is unprecedented to have suddenly revoked it. Article 370 works as a bridge between Delhi and Kashmir. Now that bridge no more exists. So how does one make the journey?” Irfan said.

Revoking Article 370, now allows all Indian citizens to work and live in Kashmir.

But when asked if the move would solve the employment issue in the state, Irfan said it will only “deepen the political crisis in the state”.

"There is no scope or opportunity of employment in Kashmir today. There is rampant corruption. Exams are conducted for the Kashmir Administrative Services but hardly any normal person can avail the opportunity. This is the reason a generation of Kashmiris chose to move out,” he said.

With the admission season at the Delhi University ending, students from all over the country are moving into the national capital in search opportunity and learning.

Umer, a prospective Masters student in Delhi University, is excited to begin his studies, but also worries of things back at home in Srinagar.

"The way the Article 370 was forcefully revoked is uncalled for. The people of Kashmir who are actually governed by the Article were kept in the dark about this. Communication was completely disrupted. Laws are enabled and enacted with transparency because they are for the people. But that’s not the case in Kashmir,” he said.

Umer believes the government will face the impact of their decision, either now or later. He is of the opinion that revoking Article 370 has sent a message to Kashmir: that force of will may be used to bring about change. “This is what they did during demonetisation,” he said.

For many like Umer, the Centre’s sudden decision has shattered their confidence. Another Delhi University student from Kashmir, on the condition of anonymity, said the decision is a “symbol of betrayal”.

“The Centre's move on Article 370 has shattered the confidence of Kashmiris. It has belittled those who believe in the constitution and it has angered those who revolt against it. It is a sense of betrayal. Soon, a fear would prevail in the Valley that the Centre can do anything to us from Delhi,” said the DU student.

While there are youngsters like Umer, there are also quite a few like Vimarsh Vipul Garg of the Venkateshwara College in DU who said it is too early to predict the impact of the move.

"Internal security and external foreign relations will have a lot of impact on this issue. America wants to withdraw its forces from Afghanistan. When that exercise finishes, the Taliban will eventually get stronger. This is a threat to India's internal security. So there is a lot left to unfold in the aftermath of this,” he said.

What happens next for Jammu and Kashmir is not known. Yet, some factions of Kashmir remain hopeful of a better tomorrow.