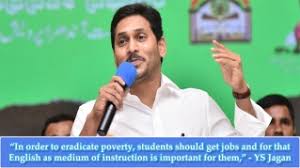 The Andhra Pradesh government’s decision to make English the compulsory medium of instruction in all government schools has been controversial right from the start, inviting heavy criticism from several quarters. And now, the government has decided to rope in the children’s parents, asking them to vote on the matter.

Schools in Andhra Pradesh have been instructed to ask parents to vote by filling out a simple form, where they can choose between two options — ‘English medium with Telugu as a compulsory subject’ or ‘Telugu medium.’

The Jagan Mohan Reddy government had gone ahead with its decision, despite criticism, issuing orders and making preparations through bridge courses for students and special training for teachers who would be switching from Telugu medium to English medium. 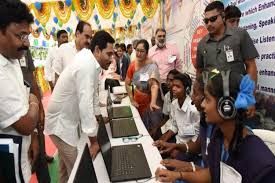 The Government of Andhra Pradesh issued an order on Wednesday stating that it will introduce English as a medium of education in all government schools in the state from the next academic year.

The state government order mentions that classes from 1 to 6 will be converted into English medium from the academic year 2020-21. Other classes will shift to English gradually.

It further states that the Commissioner of School Education shall take appropriate and adequate efforts to implement Telugu and Urdu as compulsory subjects depending on the current medium of instruction in all the schools.

The state government has ordered the Education Commissioner to provide training to existing teachers, and while recruiting teachers, give priority to those conversant in English.

Led by the Yuvajana Sramika Rythu Congress Party government, Andhra Pradesh has recently announced its decision to offer English as the medium of instruction in government-run schools across the state. While supporters of the move hail it as a landmark decision to correct the historical injustice meted out to the marginalised, critics fear the potential threat to Telugu language and culture.

The Yuvajana Sramika Rythu Congress Party (YSRCP), led by Y S Jagan Mohan Reddy, came to power in May 2019 with a huge mandate, winning 151 out of the 175 assembly seats in the state. Political observers attribute this spectacular poll success of the current chief minister to his 341 days padayatra (walkathon) across the state during the election campaign. During his walkathon, he consulted people on the ground in 13 districts of the state, and one of their demands was English-medium education for their children. After ascending to power, Reddy is, in fact, honouring his poll promise of English-medium schools despite mounting criticism from the opposition and a section of the society which fears the loss of identity and culture due to this move. Countering their criticism, he asked his critics to introspect as to whether they send their children and grandchildren to English- or Telugu-medium schools (Indian Express 2019). Most of the critics are from privileged backgrounds, and send their children to English-medium private schools. Their argument is that the introduction of English-medium schools will prove to be an onslaught on Telugu language and culture. However, it is surprising that they expect only the marginalised to take the responsibility of protecting culture and tradition while the rich continue to enjoy the fruits of modernity riding on quality education in English. Anyone interacting with the people at the grassroots level knows that the marginalised communities want their children to learn English so as to have a level playing field in the contemporary competitive world. The 2017 Bollywood movie Hindi Medium sheds light on the aspirations and struggles of families in admitting their children into elite English-medium schools under the Right to Education Act, 2009, which mandates 25% reservation for weaker sections and economically disadvantaged groups (EWS) in private unaided primary schools.  A large number of poor aspiring families is unable to admit their children private English-medium schools through reservation and also cannot afford quality English education due to the lack of financial resources.

Historically, English has been the preserve of the elite and privileged in India. It is a well-known fact that the first people to benefit from English education in India were the privileged and elites, who could send their children to English-medium schools and accumulate cultural capital over time.  One needs to note that it is not only English as a language of instruction but the way it is spoken (accent) that creates a hierarchy in the society and allows the privileged to garner immense cultural capital (Bourdieu and Passeron 1977) to be used for social mobility.

A Long-standing Demand
Demands for English-language education for the masses at various levels, especially for the marginalised, are not new. In his deposition before the Hunter Commission (also known as Education Commission of 1881), Jyotiba Phule sought quality education for the depressed classes along with English-language education for high school students of the marginalised castes (Deshpande 2002). It should be noted that the issue of language was not Phule’s main concern; he wanted disadvantaged groups and women to have access to quality education. Therefore, he set up Marathi-medium schools for both the disadvantaged and women. However, marginalised groups have been demanding English as the medium of instruction for a long time in social mobility and to exercise more freedom.

Empirical studies show that students from marginalised communities in colleges and universities feel that their poor academic performance is due to the lack of knowledge of the English language (Anand 1999). The author’s own experience of teaching in a minority college in Bengaluru, which privileges students from marginalised communities through its admission policy, revealed that students aspired to study in English-medium colleges, and they believed that it would help them for social mobility. The college not only privileges the marginalised through its admission policy but also creates a space for critical pedagogy by following Paulo Freire’s educational method.[1] More often than not, students in such minority institutions have more social knowledge of discrimination (because of their caste and class position) and inequality due to their lived experience and critical pedagogy as compared to those studying in elite colleges in Bengaluru.

One of the students from the college who regularly participates in debates in intercollegiate festivals said,

Andhra Pradesh Chief Minister YS Jagan Mohan Reddy’s decision is historic because it has once again shifted the focus back to government schools. The Nadu-Nedu programme is in line with the Supreme Court order as it increases the scope and choice of parents and children in selecting the medium of instruction hitherto unavailable to them. There are two important aspects in Reddy’s decision. First, there is a moral and an ethical dimension of honouring the poll promise he made to people during electioneering and holding himself accountable. Unfortunately, the reputation of a large pool of Indian politicians in this regard has not been very good. The second aspect is the constitutional morality as he addresses fundamental aspects of inequality, which in itself is a mandate for the elected government to fulfil as per the Constitution.

However, the introduction of English as the medium of instruction should not be seen as a panacea to revive the education system as there are many other aspects that plague government schools. Poor infrastructure, unavailability of regular and trained teachers, and caste- and class-based discrimination are some of the most pressing issues (Ramachandran and Naorem 2013). At the same time, the introduction of English-medium schools, along with other issues taken care of, has the potential to attract more children across caste and class to government schools. It can become a game changer in addressing ever-widening inequality and increase the possibility of social interaction and dialogue across caste, class, and religious divides. While these are not stated objectives of the scheme, however, the return of the privileged to government school fold will have a positive impact.

The real challenge for the YSRCP government in carrying out its ambitious plan is the presence of a larger number of teachers who have not been trained in English. This could be addressed by training teachers in consultation with language experts and by digitising classrooms. The other challenge is with the parents, as most of the students from marginalised communities are, perhaps, the first-generation to study in English-medium schools and lack a home environment to complement their learning at schools. To tide over this challenge, many experts suggest bilingual education for students at the primary level and making the move to English-medium instruction gradual (Mohan 2014). This would make the journey of students and their families less difficult. My argument is to provide English as the medium of instruction in addition to teaching the mother tongue or multiple languages.

It is also wrong to assume that learning English necessarily leads to the demise of the mother tongue or that those who learn English would forget their own language. However, it is also true that languages could become extinct without institutional support. Providing bilingual or multilingual education could address this issue. An argument in favour of English-language education should be primarily seen in the context of social mobility, boosting the confidence of students by enabling them to cater to a larger audience and by gaining access to wider knowledge resources. In that sense, learning English is equated to having more freedom, confidence, and reach. Besides, protecting the mother tongue is not the sole responsibility of the marginalised groups.