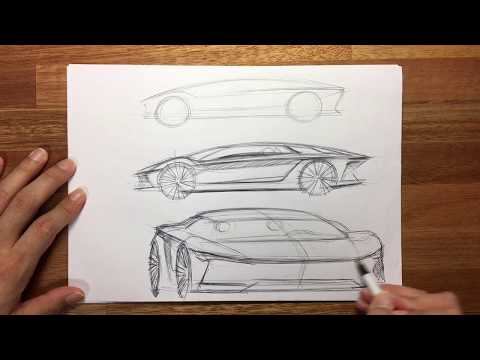 Concept cars are often radical in engine or design. Some use non-traditional, exotic, or expensive materials, ranging from paper to carbon fiber to refined alloys. Others have unique layouts, such as gullwing doors, 3 or 5 (or more) wheels, or special abilities not usually found on cars. Because of these often impractical or unprofitable leanings, many concept cars never get past scale models or even drawings in computer design. Other more traditional concepts can be developed into fully drivable (operational) vehicles with working drivetrain and accessories. Starting with nothing more than an idea sketched on paper, the process of taking a car to a gleaming production concept on the auto show floor typically takes about three years. At any point along that path, the design can be fundamentally changed or even thrown out. Designers quickly learn that their idea is not necessarily going to become reality most of the time. Three years is not set in stone - some designs take longer while others can often shortcut and take less time. In general, though, there are several steps for a design to go through before becoming a showroom-ready vehicle.